Biblical Goliath may not have been a giant 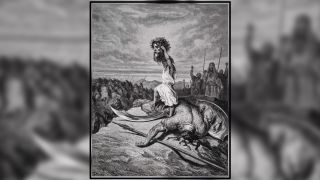 Goliath, the giant who was felled by King David in the Hebrew Bible, is described as having a jaw-dropping height.

But that number may not have been a true physical measurement but rather a metaphor, drawn from the width of his hometown’s city wall, new research suggests. That doesn’t reveal whether other aspects of the story are true — for instance whether Goliath was a giant or whether his mismatched battle with David took place.

“We’re not trying to make a statement on the veracity of the story,” said Jeffrey Chadwick, Jerusalem Center Professor of Archaeology and Near Eastern Studies at Brigham Young University, in a paper he presented at the American Schools of Oriental Research (ASOR) virtual annual meeting on Nov 19. “The issue is the metric,” he said, “where does it come from, where might it have been obtained?”

Some ancient texts say that Goliath stood at “four cubits and a span” –- which Chadwick says equals about 7.80 feet (2.38 meters) — while other ancient texts claim that he towered at “six cubits and a span” — a measurement equivalent to about 11.35 feet (3.46 m). That would certainly have been an impressive height, as the tallest recorded person in modern times was Robert Wadlow, who stood an impressive 8 feet 11 inches (2.72 m) tall, according to Guinness World Records.

But how much these “cubits” and “spans” are in modern-day measurements is a source of debate among scholars. These measurements probably varied throughout the ancient world. Chadwick has been studying ancient architectural sites throughout ancient Israel, measuring the remnants of numerous structures and noting measurements that seem to be used frequently. His research indicates that a “cubit” in the region was equal to 1.77 feet (54 centimeters), and a span was equal to 0.72 feet (22 cm). He is preparing his metrics to research for publication.

Chadwick is part of a team that is excavating Gath (also known as Tell es-Safi), a Philistine city where Goliath grew up, according to the Hebrew Bible.

Recently, the team has excavated a fortification wall found in the northern part of the lower city. The wall was built in the 10th century B.C., a time “when the Philistines controlled the city as it served as their capital,” Chadwick told Live Science. “The stone wall foundations measured exactly 2.38 m — four cubits and a span — in width at every point along the 40 m of its line exposed by our excavations,” Chadwick said. He noted that the wall may have been 23 feet (7 m) high.

In his ASOR presentation, Chadwick proposed that biblical writers may have gotten Goliath’s height from the width of the northern lower city wall of Gath. He noted that Goliath is the only person whose precise height is recorded in the Bible. “Nobody else’s height is recorded as an actual metric,” Chadwick said.

Given that the Bible’s authors likely didn’t have access to Goliath’s corpse, this leaves the question of where biblical writers would have gotten Goliath’s height of “four cubits and a span.”

So it’s possible the writers may “have been metaphorically describing the champion [Goliath] as being comparable to the size and strength of the Philistine capital’s city wall —a metric that would have been preserved over many centuries and would have known from those familiar with Gath,” Chadwick said.

Live Science contacted several experts not affiliated with the research to get their thoughts on Chadwick’s theory. None were able to reply at time of publication. Excavations at Gath are led by Aren Maeir, a professor of archaeology at Bar-Ilan University in Israel.